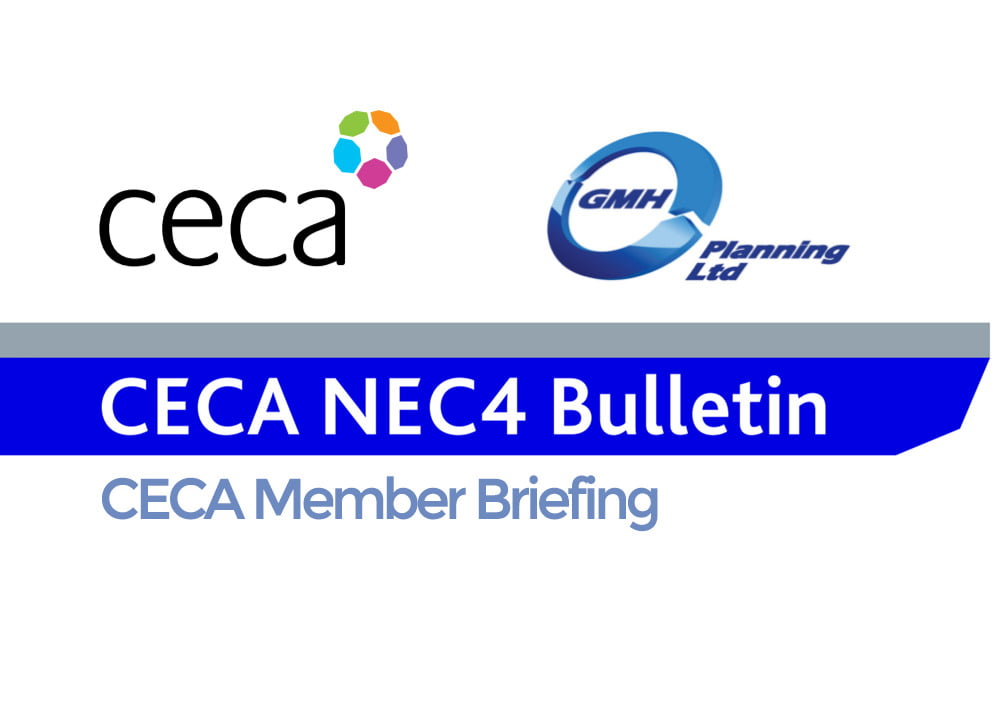 Training and development support is a key part of CECA’s core offer for its membership and working in conjunction with GMH Planning it has delivered a programme of training events around the NEC Form of Contract across several CECA UK regions.

In addition to this training a series of monthly NEC Contract Bulletins are being produced for both Contractors and Subcontractors to improve practical awareness on key topics within the NEC. The coverage whilst not exhaustive is intended as a general overview on some of the contractual principles to increase a wider understanding in support of more sustainable outcomes.

These bulletins are based on the latest NEC4 family of contracts, but the same principles and rules would apply where parties are engaged under an NEC3 form of contract.

Despite the intent of both the principles behind and the contract processes embedded in within the NEC seeking to avoid disputes from occurring in the first place, there is some inevitability that they will occur on occasions given the nature of the construction industry. The ultimate sanction to resolve such a dispute would be adjudication, but there is a new formal interim step within NEC4 which can be taken first. There are also more general practical steps that can be taken by both Parties to resolve any such disputes without the need for the more formal adjudication.

Subjectivity within contract wording: The drafting of NEC contract clauses go a long way to avoid the subjectivity that tends to exist within other forms of contracts used in the construction industry. The NEC contract clauses are generally clear, concise and with numerous terms provided with specific definitions to establish what they mean. It is probably unrealistic to think any contract can have no subjectivity, or not at least without making it so wordy that it would become too cumbersome and impracticable to follow. NEC contracts are a good balance of being manageable whilst concise enough to limit the areas of potential argument in the majority of cases. However, there are examples where a degree of subjectivity still exist within NEC contracts and that are difficult to avoid, such as:

In these situations, either party should just make it clear to the other how they believe they have been practical, transparent and realistic when making decisions in these instances.

Improvements to NEC4: The first steps to avoiding disputes is to take away subjectivity and any errors that may exist within the contract. NEC4 when it was launched was described as being “evolution rather than revolution”, providing subtle changes and improvements to the contract rather than an overhaul of contractual processes. Examples of areas that NEC4 has improved or tightened up on such processes are:

NEC4 use of Senior Representatives:  There is now the facility within contract data for both Parties to name senior representatives at tender stage. The intent is that if both Parties agree, any dispute will first go to those named representatives to try to resolve before going to adjudication. Under option W each party submits to the other their statement of case within one week of the notification of the dispute. The Parties present their case (limited to ten sides of A4 content) and have as many meetings as necessary over the following three weeks to produce a list as to what has been agreed. The Project Manager and Contractor put into effect the issues agreed by the senior representatives.

Potential stigma around adjudication: Unfortunately, there are reservations about going to adjudication. Its use is not necessarily considered in the context that it was intended to be. Instead, perceived as a challenge that will create an adversarial atmosphere between the parties. Considered likely to damage to relationships both on the current project and for the contractor’s future opportunity rather than being seen as a mechanism to address a simple “professional difference of opinion”. This is a position that collective our industry needs to address.

When should a matter be taken to adjudication? This can (and should) be done at any stage during the life of a project, despite the tendency that historically such issues have saved until the end of the project to resolve. It would be much easier to decide closer to the time that any issues occurred, rather than to wait and look back historically (when people originally involved at the time may have moved on and records may or may not prove adequate in verifying the true picture). To try to resolve numerous issues at the end of the project in one big global claim/dispute does not normally go well and can often be very protracted and drawn out with less certainty for either party on the outcome. By assessing and dealing with issues for adjudication as they arise, the Parties to the contract will become more informed and this lead to changes in behaviours and effectiveness in addressing future issues that may occur.

Other ways of resolving disputes: There are also of course some basic things you can do to try to resolve the dispute from escalating in the first place:

Summary – Whilst disagreements between two Parties on a construction project may arise from time to time a collective understanding and adherence to the rules of the contract from the outset will help limit this. Try talking and explaining your relative positions on any issues and listening to each other to try to agree a way forward. Do not be afraid to utilise the NEC4 mechanism of senior representatives to look independently to see if they can reach an agreement. Ultimately, if it really is something that can not be resolved at project or senior representative level then do not be afraid to use adjudication. Try not to see this as being a confrontational or aggressive process but simply a means of how to resolve a professional difference of opinion between two Parties.